David Miller from Rochester, NH sent along a picture and some great history on his Fleetstar.

His grandfather, W. Paul Miller, bought the boat from Fernalds Marine in 1957.   The boat was refinished by Fernalds in the mid 60’s.   David still has the receipt from Fernalds and has offered to scan it for us.   In the mid 80’s.  David and his father replaced the Bow Plywood and Mahogany strips.    In 1990, Hurricane Gloria ripped off the windshield.  The boat now has a replacement.    The picture below was taken in 1988. David is in the boat with his mother, while his sister lounges on the deck.   His father took the picture.   Since starting this site i’ve heard many stories of great family memories that took place with the Hiliner boats.   I’m always looking for more stories and pictures to add to the site.

David still owns the boat and uses it regularly on Milton Three Ponds and in Laconia. 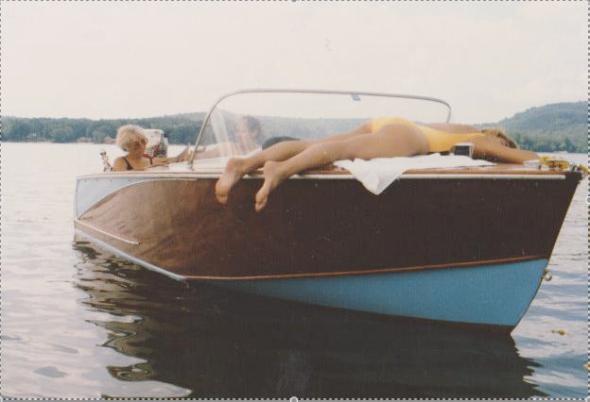 This entry was posted on February 10, 2012 by jamesbowes. It was filed under FleetStar .